A two month hiccup - lots to catch up with!

I suppose all bloggers go through lean times - when the weather is too nice, the day job too demanding and the jobs at home too pressing - and a 'secondary' pastime like Blogging falls by the wayside.

Anyway, after a gap of just over two months, I suppose we'd better catch up! What has happened?

1. We had some EPIC lightning - quite amazing, and like nothing I've seen in many years in the UK. I set up my DLSR and tripod, and took some long exposure shots... 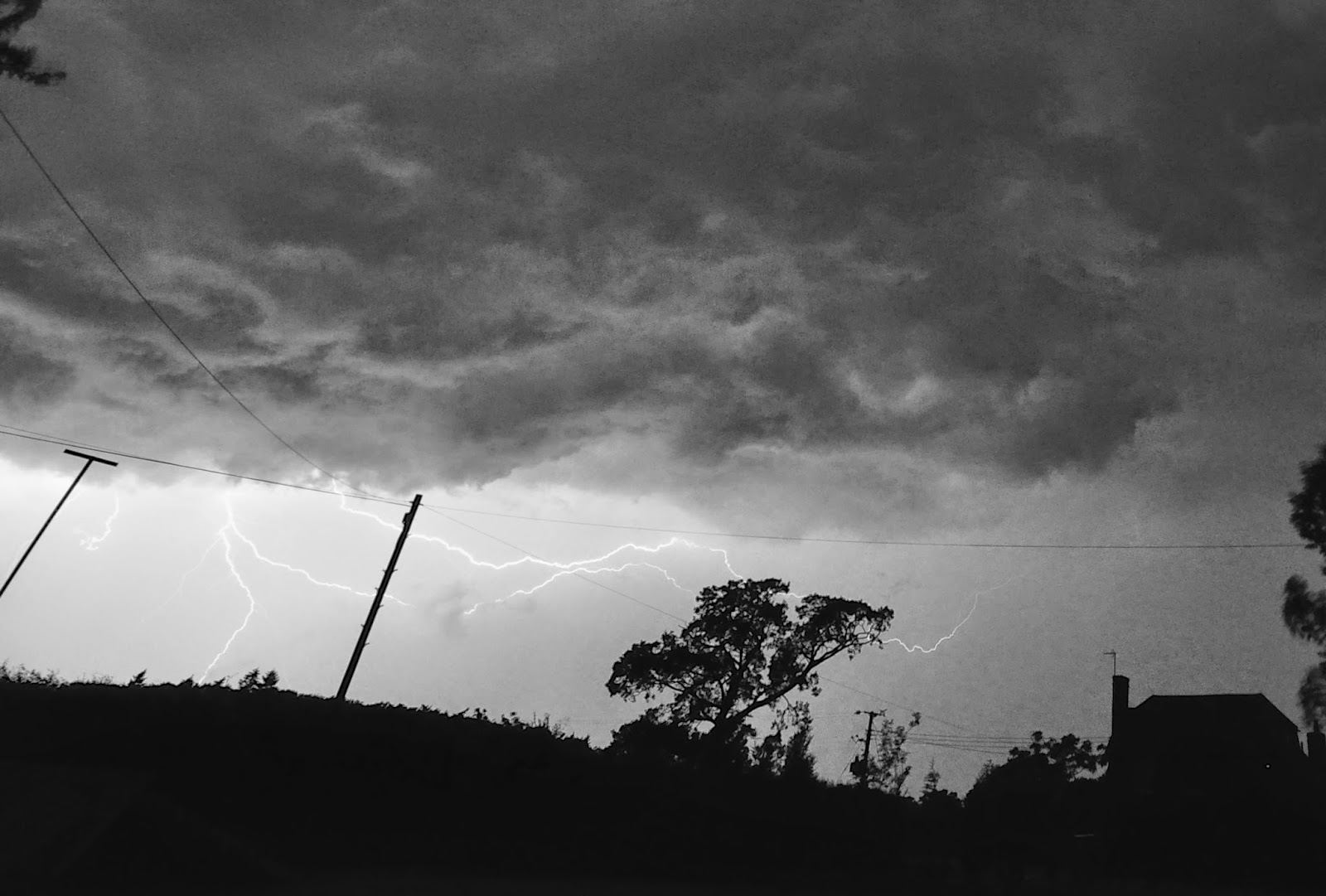 2. We have had some amazing sunsets... 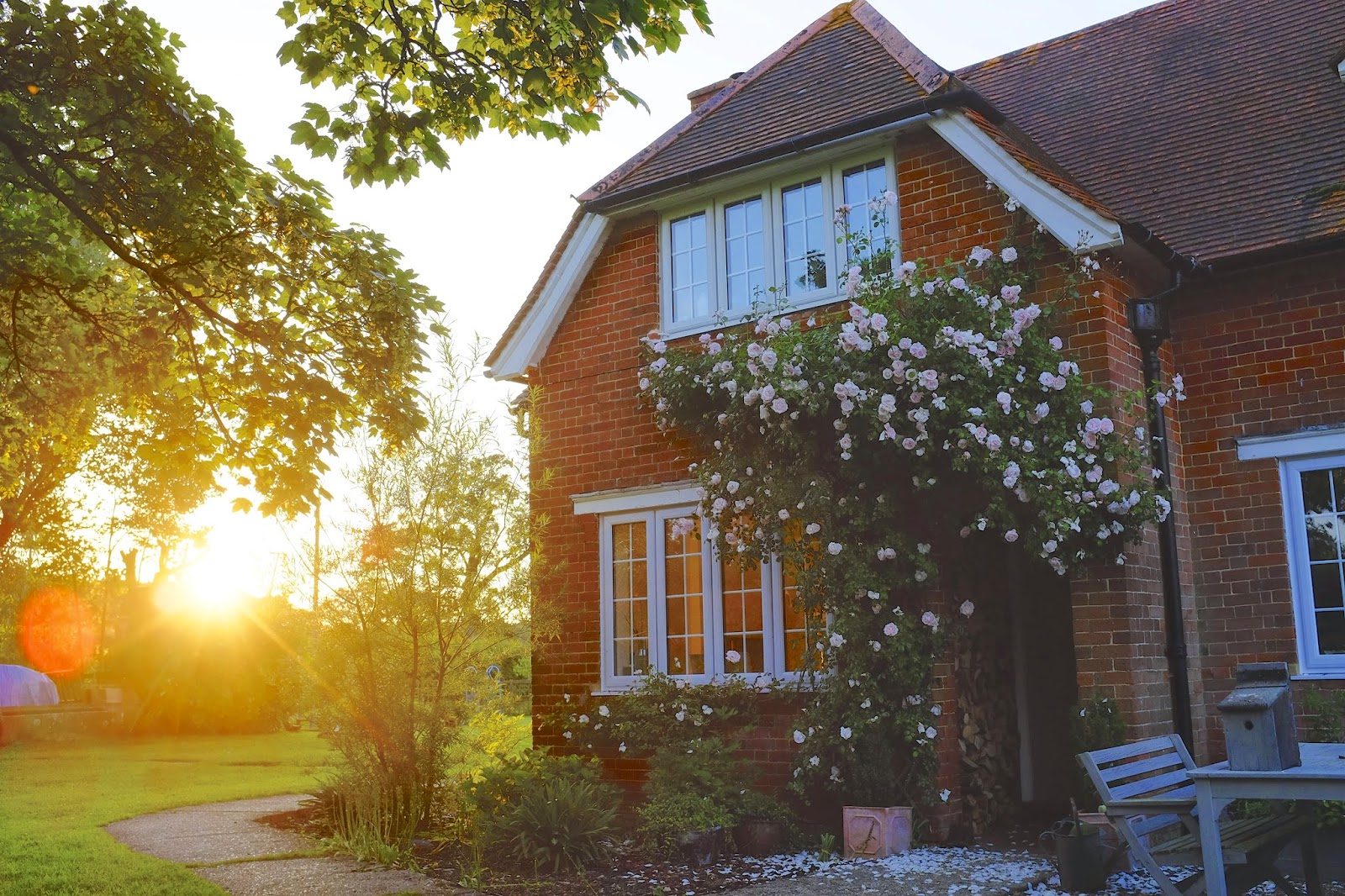 3. Monty is still a deranged lunatic, despite recently celebrating his fifth birthday. He loves this time of year - the garden is full of wagtails and swallows / swifts / martins (I've never been able to tell the difference...) which he loves barking at and chasing. 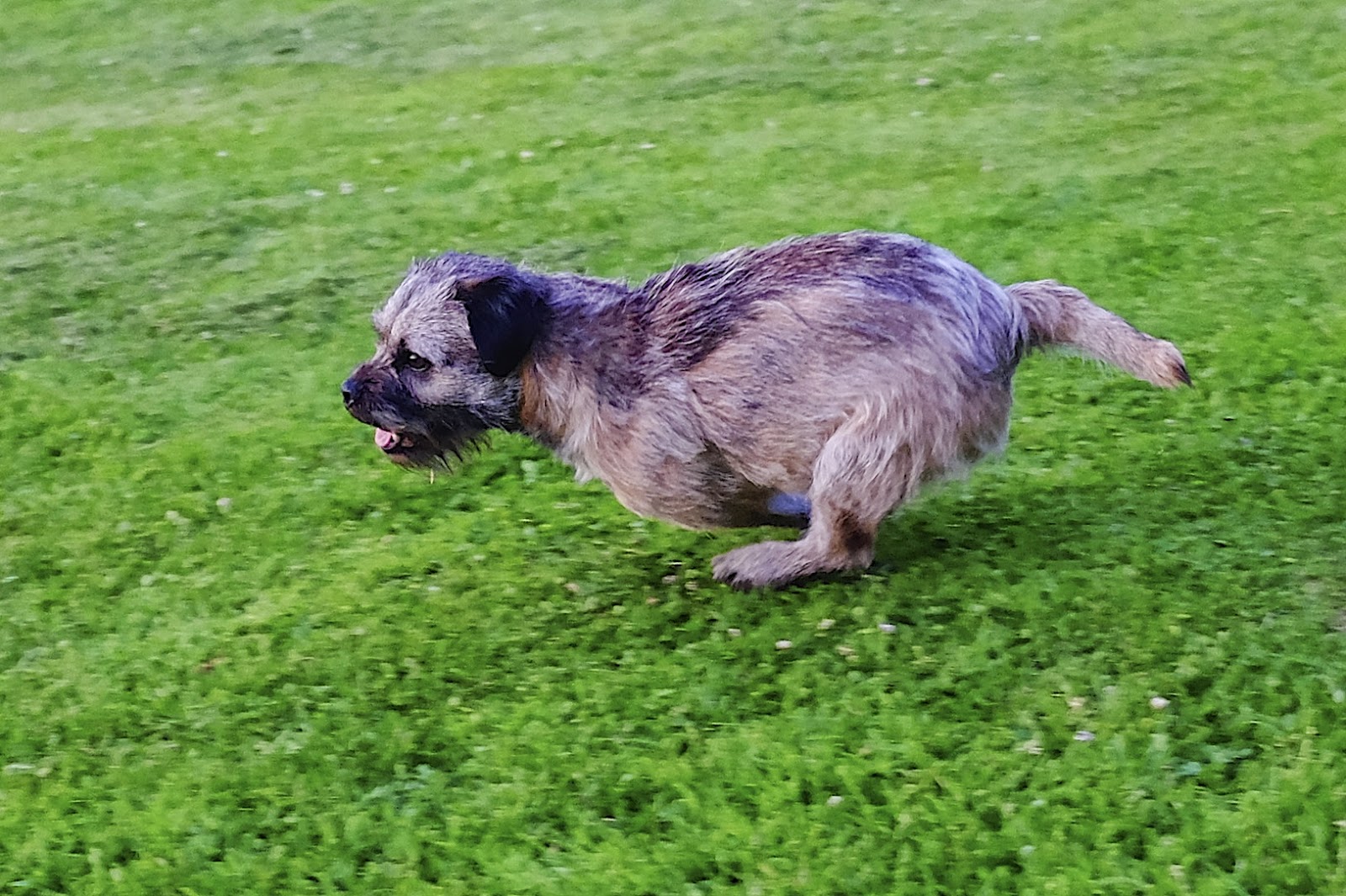 4. The workshop move is finished! Part of the reason for a lack of blog updates was that we found a ground worker who can start on 20th July, which means that our site for the barn has to be clear and ready to break ground. Emptying the workshop and stripping the roof was quite an easy job, and then the walls came apart without much protest. It took five of us to carry the long wall sections the 30 metres across the garden, where they were plonked into position on the new dwarf walls. At this point I realised I'd made a moderately serious error - the concrete blocks I'd used for the new dwarf wall were a different size to the old ones, and therefore the external dimensions of the wall were incorrect. Not a huge problem - it just means that the walls were about 15cm too big! A bit of sawing, screwing and nailing later and everything is fine.

Here is where the workshop used to be; 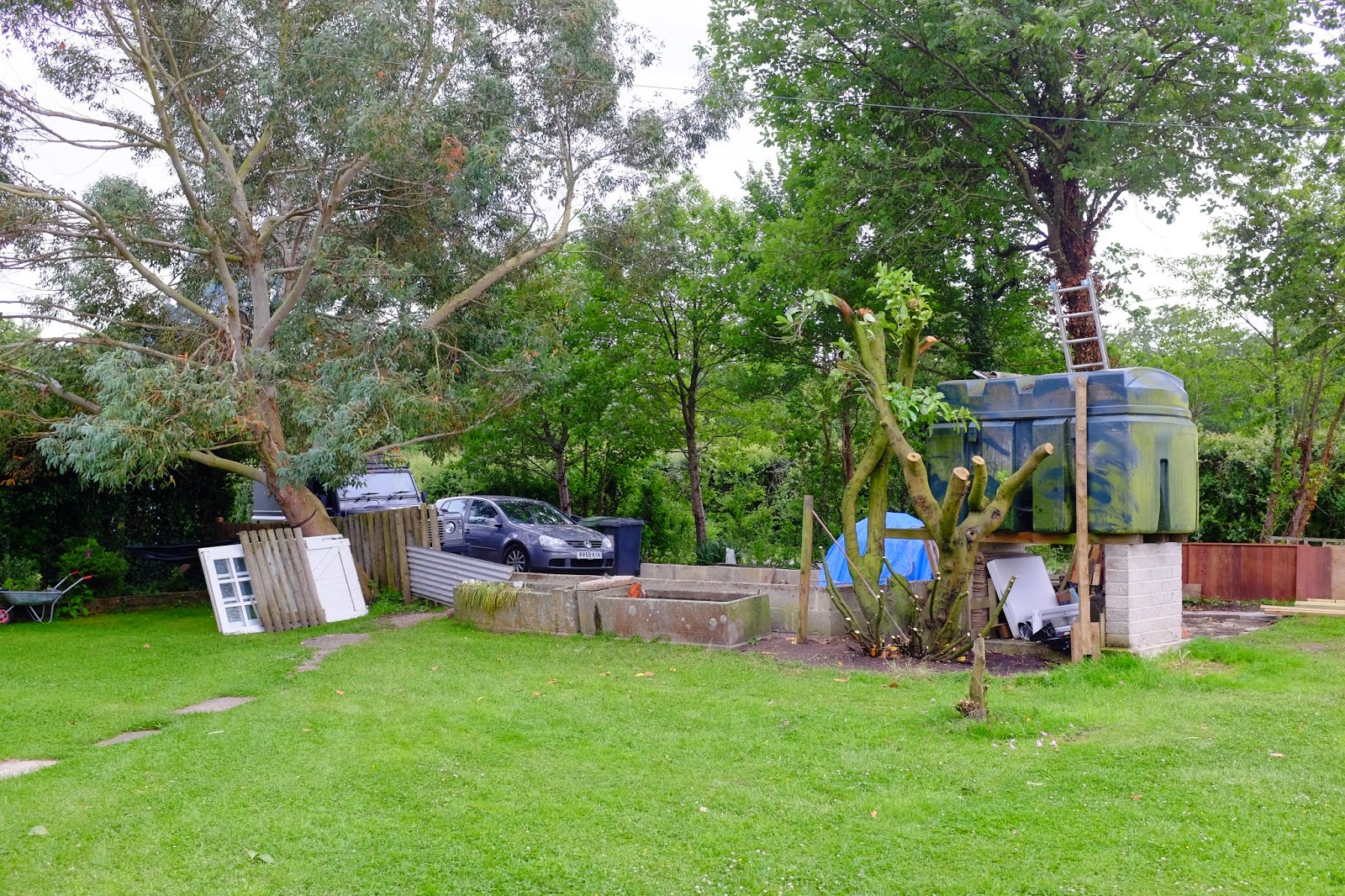 ...and here it is, partially finished, in it's new spot. The roof was re-covered in reclaimed slate, and the rafters reinforced with new and uprated wall ties. I added a pedestrian door on the other end (closest to the house...) and have since clad the gable end. It's marvellous! Note the sprig of Cherry from the unofficial topping-out ceremony... 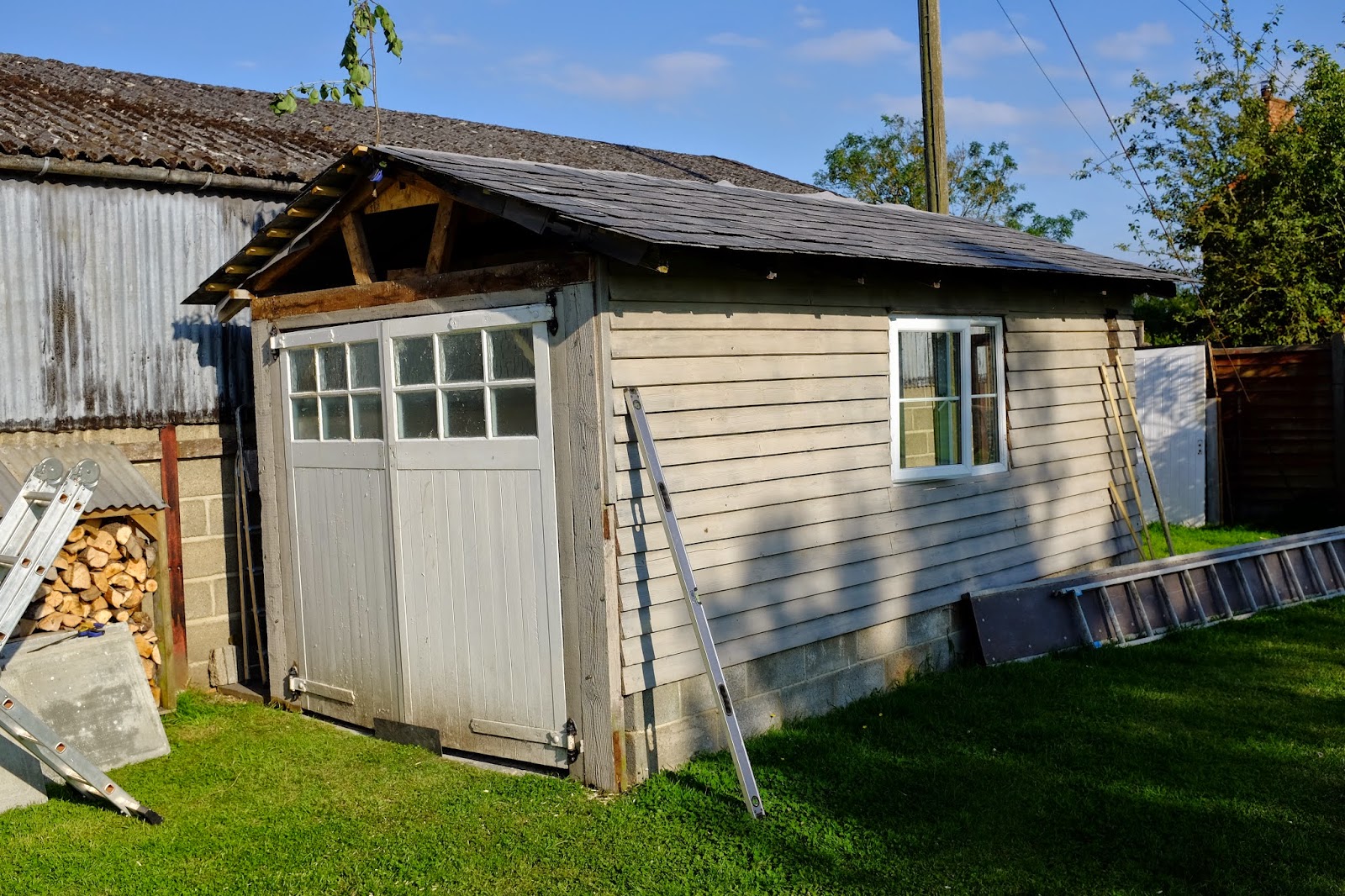 5. Kristy had her birthday - and I bought her a great cyclocross bike (hers is the silver Norco...) We had a superb day out in Portsmouth Historic Dockyard, visiting HMS Victory and Warrior, with an amazing Wagamama lunch. 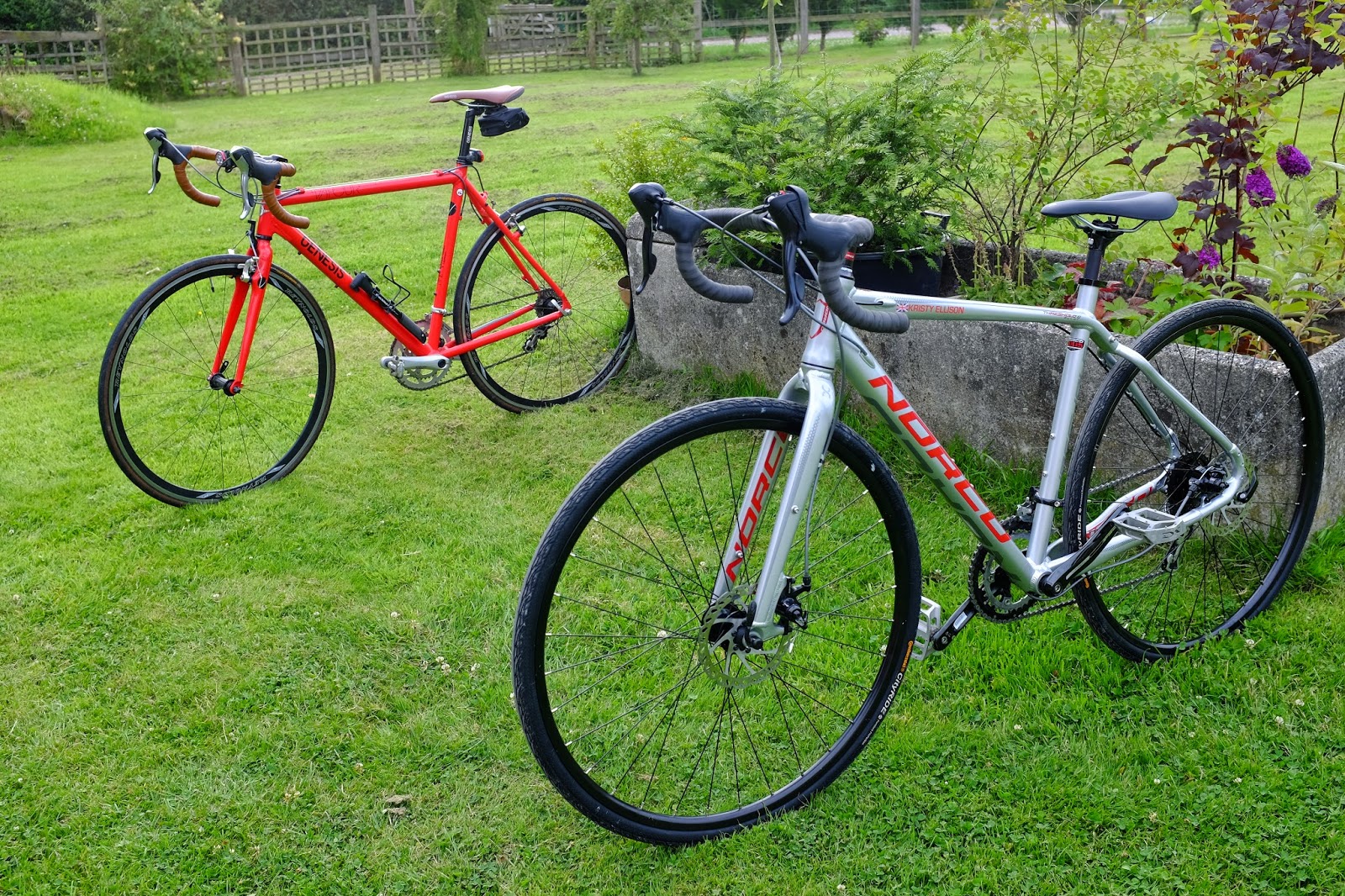 6. Our neighbour's pigs have arrived! Three sweet saddlebacks (one gilt, two sows) who have done a great job of turning over the land. They are destined for the table, so are unnamed. In other news, one neighbour has lent us a broody hen and another has given us some fertile eggs! Clever Mummy (as she is known) is sitting diligently, and I'm having to rapidly come up with a plan for a hen house and fencing. They should hatch in another 7 - 10 days, and they will stay with Clever Mummy for another few weeks. 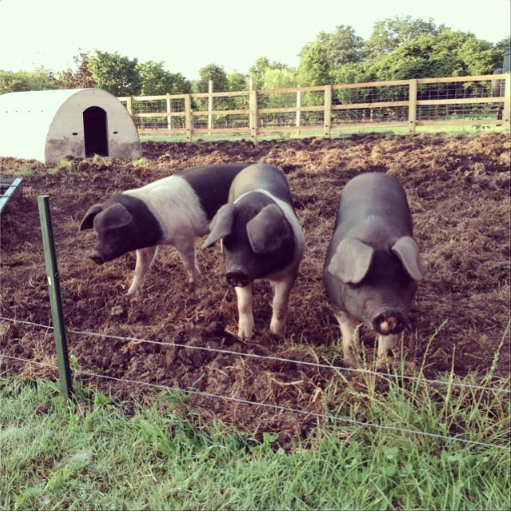 7. I've designed our garden room! The ground worker is going to be a busy man - he is laying the slab for the barn (6m x 12m), installing our sewage treatment plant and laying the slab for the garden room. The latter is a 'one day' project, but it makes a certain amount of sense to have all the groundworks completed at the same time - get all the mess over and done with! It will be 7m x 3.5m, and another green oak frame with bi-fold doors, heaps of windows and a glass gable. 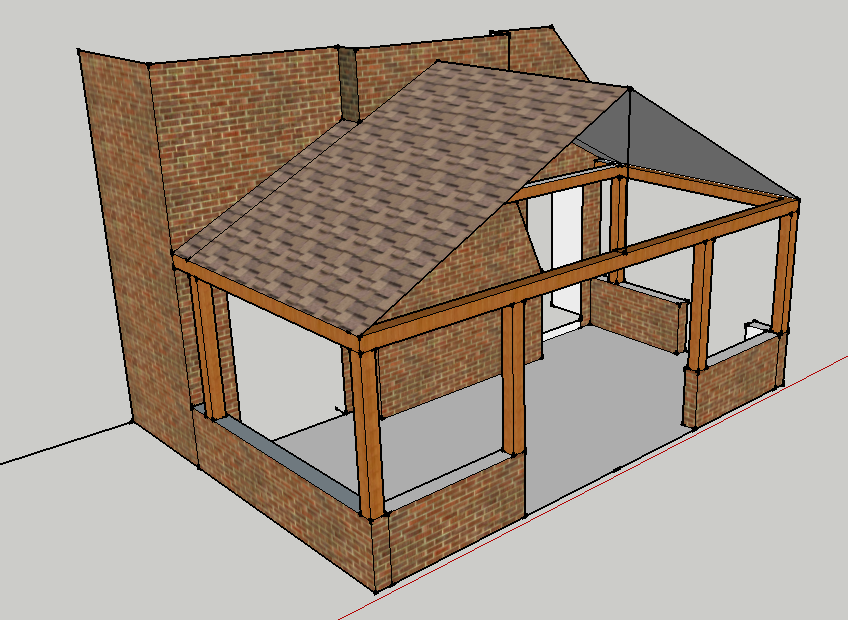