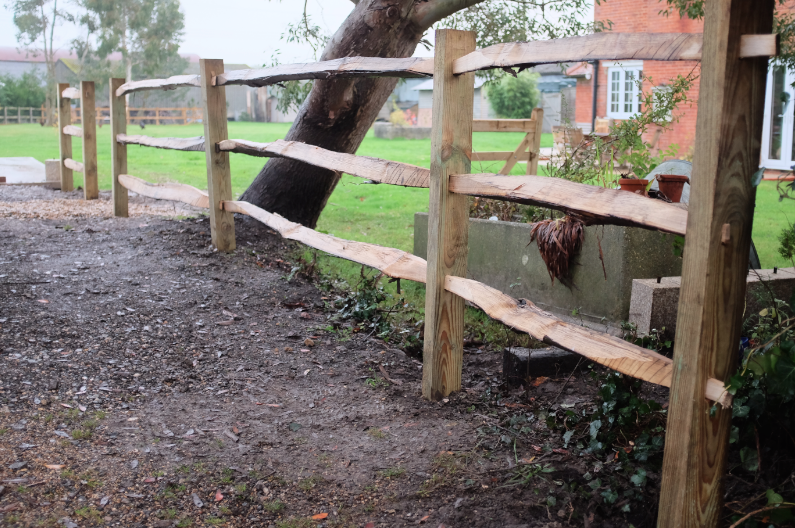 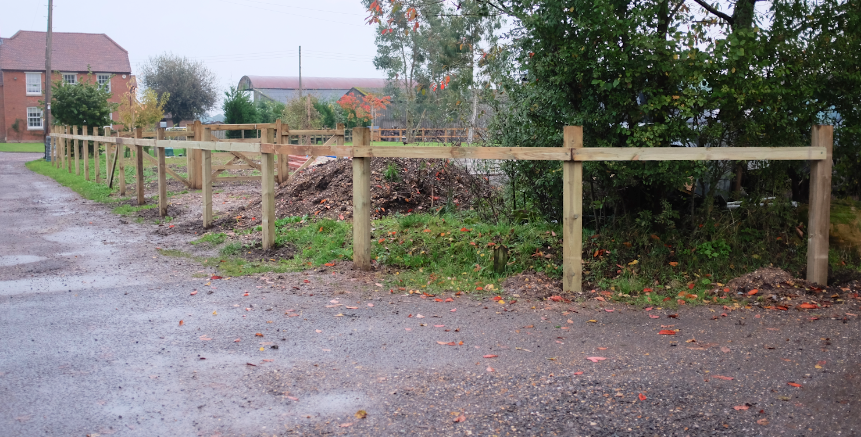 Building a fence in day-long drizzle

A fairly typical Autumn day I suppose - it was drizzling ALL DAY today. The worst thing was that it was just light enough to make you think that a jacket was unnecessary, but just heavy enough to soak you to the skin! It was also warm - so a waterproof would just cook you from the inside out.

Today's job was to start fencing between what will be the corner of the log store on the east wall of the Barn, and the end of the hedge which separates our garden from the paddock. This will be the main divide between the house and the car parking area, so we need a gate as well.

The result of the day's work isn't very impressive - but there is lots you can't see! I cut mortises in six fence posts using the chain mortiser, and tapered these three rails (they are twice as long when delivered) on the bandsaw, before they were finished with my drawknife - which gives a much nicer surface. 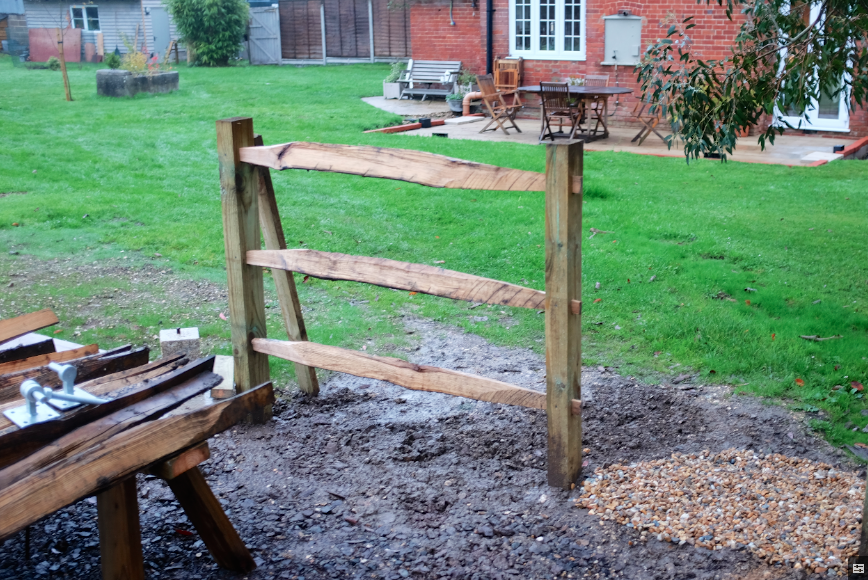 The patch of gravel is just temporary mud-management - it's where I'll hang the gate tomorrow. The left hand post will eventually butt up to the oak post at the very corner of the Barn.

Must dash - we are making home-made pizza tonight using the newly-delivered bread machine!

Another catching-up-on-the-last-fortnight post I'm afraid; I really must try harder to Blog a bit more frequently.

Two of our great beer-related discoveries in the last few months have been the Village Beer Festival and the Real Ale Train. We both volunteered to work at the Beer Festival, which gives unlimited access to 'refreshment' from the barrels as one is pouring pints for the visitors. Tremendous!

The Real Ale Train is a marvellous thing indeed, combining three of my interests - beer, trains and Victorian engineering! It runs along the Watercress Line between Alton and Arlesford in Hampshire, which gets it's name from a previous function of the line - to transport produce from the watercress beds of the upper Test Valley towards London. The idea is simple - buy a ticket, ride the steam train and drink cheap beer. Splendid!

Tickets are so popular that we had to wait some months for a space - being quite late in the year meant it was dark for much of our journey. Still, we arrived early enough to have a good look at the engine. 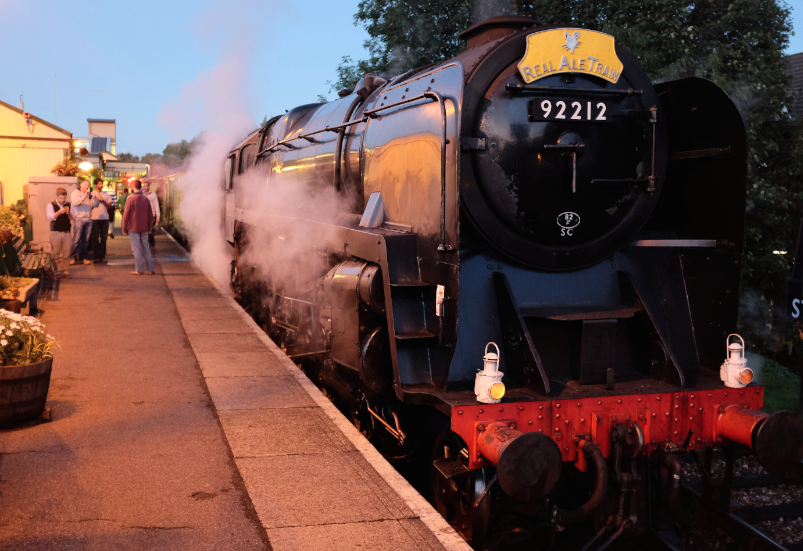 Anyway, let's have some beer! Here is Graham in the bar carriage. Everything is preserved beautifully - even the stations are done very well, with period signs, adverts and equipment. 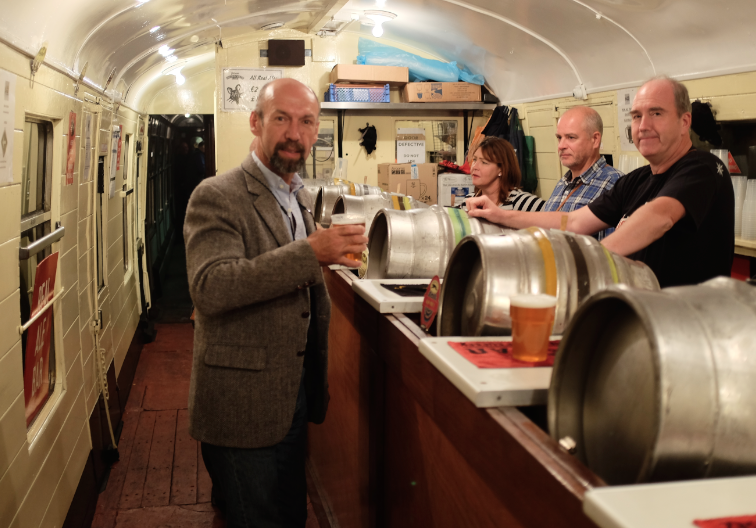 Arriving in Arlesford, we had a good opportunity to see the engine shunting as it reversed on the line. Despite the darkness, and thanks to my amazing new Fuji X100S, I managed to pull off a couple of lovely shots of the Fireman lit by the firebox. 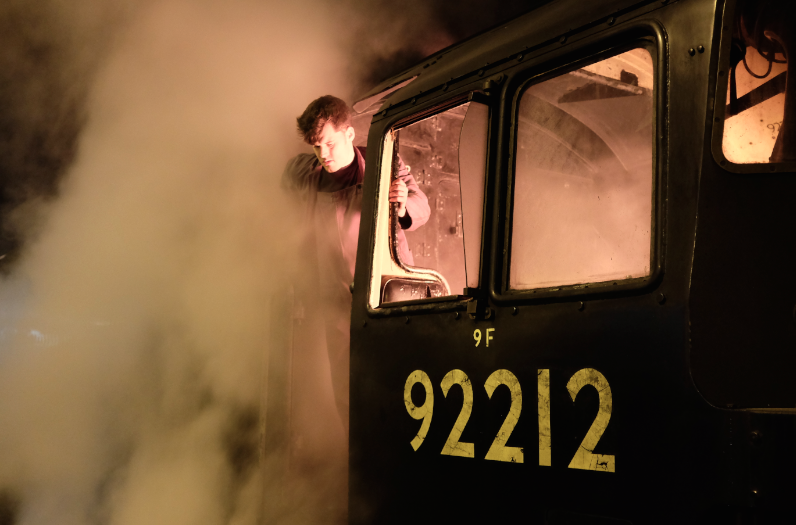 A great evening out - we are already planning a return journey, but this time in high summer so that we can enjoy the view as we travel.

Anyway, enough beer - back to work!

I ordered a load of fencing in order to provide a perimeter for our terrier Monty. We had stripped the old fence out when the ground workers came, and the garden has been insecure for a few months now. Dear old Monty has a bit of a habit of running away - so a fence is a real necessity. To make the job a bit easier (we had about 40 holes to dig, what with the fence and some trees we had bought) we hired a big hydraulic auger. It turned out that this was fine when the soil was good - but ALL the fence post holes were on very stony ground. It was very hard work, even with the auger. Eventually, we discovered that digging as far as possible with the machine, followed by a bucket of water in the hole, would soften the earth enough to allow the larger stones to be dug out with the auger and a digging bar to shift the bigger lumps.

My parents were kind enough to visit for the day to help - here is my Father having a go with the auger, digging a hole for a tree up by our top shed. 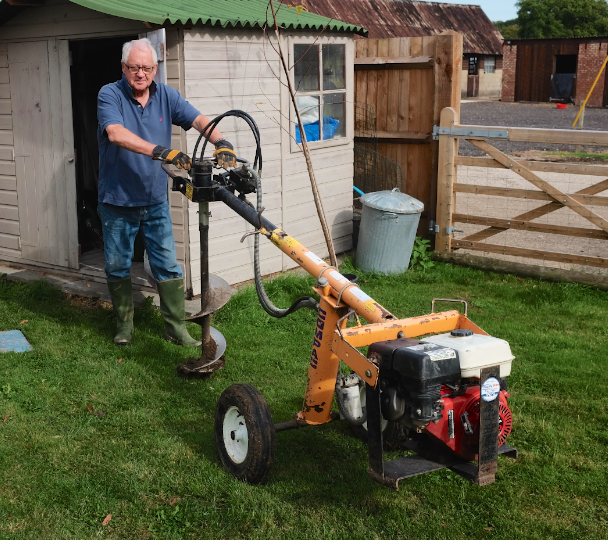 By the end of the weekend we had dug all the post holes for about 40 metres of post and rail fencing and planted 15 trees and large shrubs. This is a view of the longest run of post and rail, which will be behind the Barn when it is built. The gate means I'll be able to get the tractor out to mow the front paddock without driving through our neighbour's farmyard. 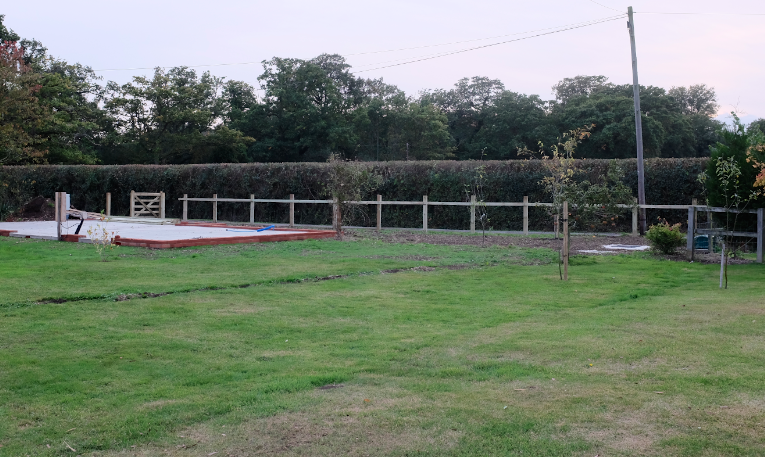 Finally, I woke this afternoon after a night shift to find that Kristy had bought more hens! We are due to return Mummy (actually called Indigo, as it turns out...) to her rightful owner, which would have left Isla (possibly a Barnevelder, who we raised from an egg) on her own. Two new Black Star hens have now moved in - one is to be named Florence, but we are stuck for a third name.  We now have a flock of three - a perfect number for us!

Here are the Egg Squad - Isla is on the left, and the two new girls are on the right. 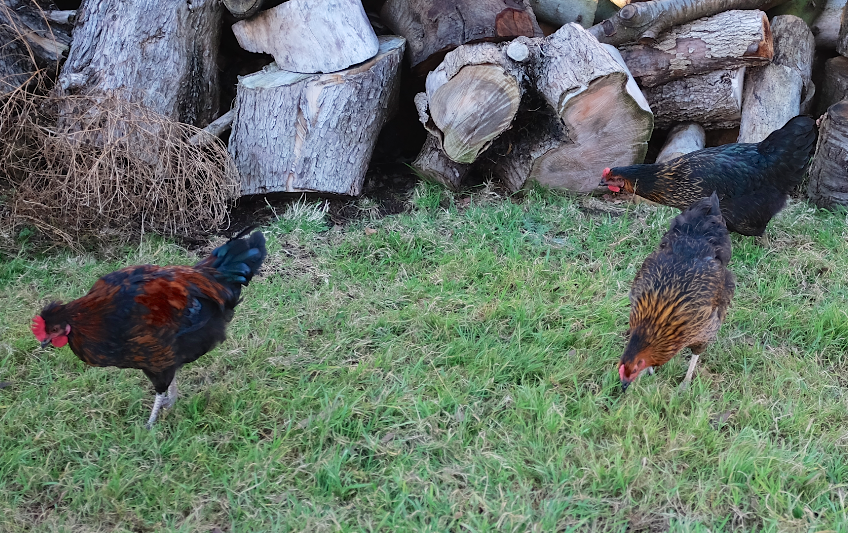 Our Lives Ruled by Carpets

Firstly, an apology - it's been awfully quiet on AnAcreInHampshire for the last few weeks. This is in complete contrast to what life has been like here - we have been crazy busy!

Our efforts have been almost exclusively spent achieving one goal - CARPETS. We have been living in fairly basic style for the last year-and-a-bit, with the vast majority of our furniture, books and precious things packed away in our sitting room. Upstairs we had a bed, a set of drawers and LOADS OF TOOLS - I even had the luxury of an indoor workshop for most of the last year. Having finished the majority of the indoor building work, the time had come to move the tools out and the furniture in.

Knowing that we both work well to a deadline, we bought some carpet online and booked a carpet fitter, leaving about three weeks to transform three bedrooms and a landing from near-chaos to completely empty, decorated and ready to carpet.

There was a LOT of work to do - the small bedroom and the landing needed lining in 6mm plywood owing to uneven floorboards, I needed to fit extra sockets into the ring main and there was a set of central heating pipes which had to be moved - when the carpets were down, there would be no access under the floor in the whole upstairs of the house. Add to that the need to redecorate one and a half bedrooms, fit a load of skirting, repair a leaky radiator and touch up everything else - we had our work cut out!

I'll let the pictures do the talking...

Here is Kristy hard at the decorating - that odd little alcove was created when I built the wall that is to her right for the bathroom - one day, we'll have a built-in wardrobe in this space. Kristy was amazing during the re-decoration phase, pulling a 14 hour day to get the rooms ready... 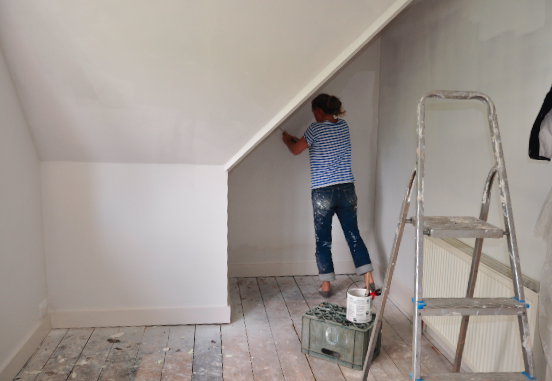 My contribution was more building-related - here is some of the ply lining going down in the small bedroom. I wanted to be VERY sure we had a good base under the carpet - the 8 x 4 sheets had about 80 screws per sheet holding them down. 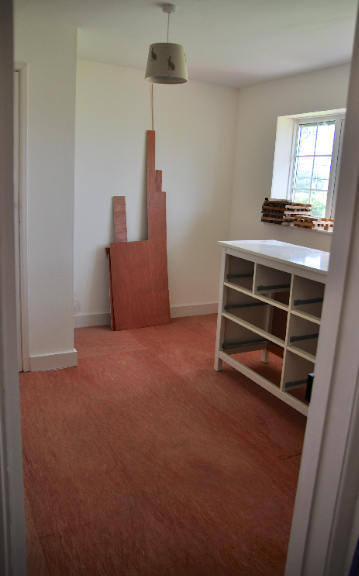 This was almost our last view of the old floorboards. We had to completely empty all the rooms before Paul the Carpet Fitter came, so everything had to be carried downstairs the night before. 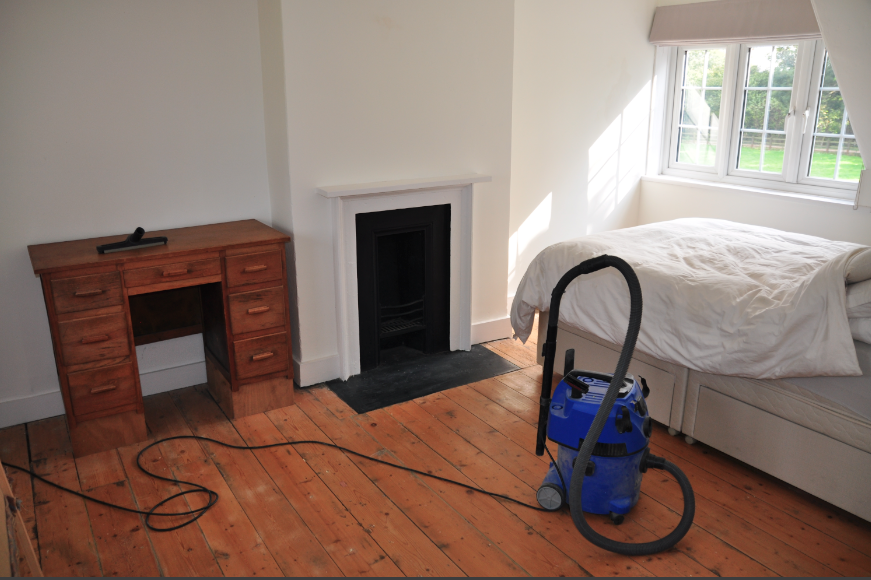 Here is Paul adding the final touch to our landing... He has done a lovely job, and even though he wasn't cheap we were very pleased with the quality of his work. He even installed oak thresholds between the rooms, and along the edge on the stairs - much better than brass, and more fitting for the house. 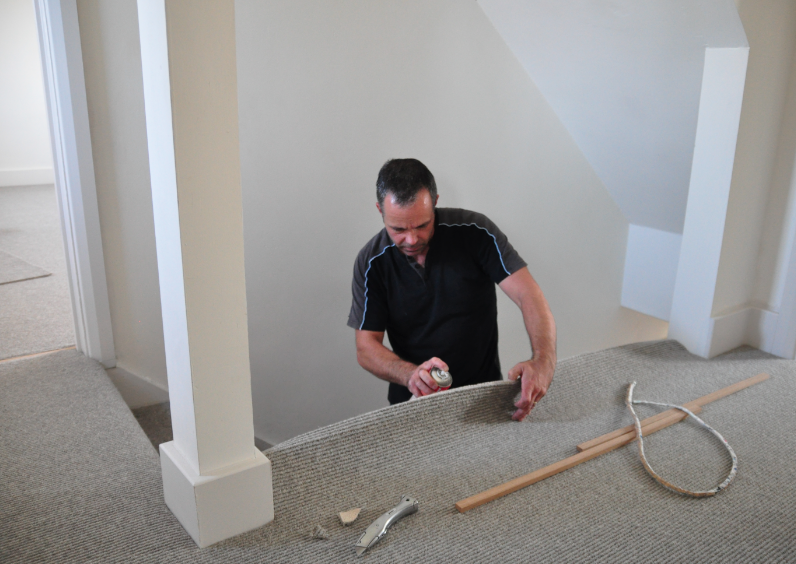 ...And a final After Shot - a wide angle pic taken from our bedroom, looking over the landing and into the bathroom and bedrooms. 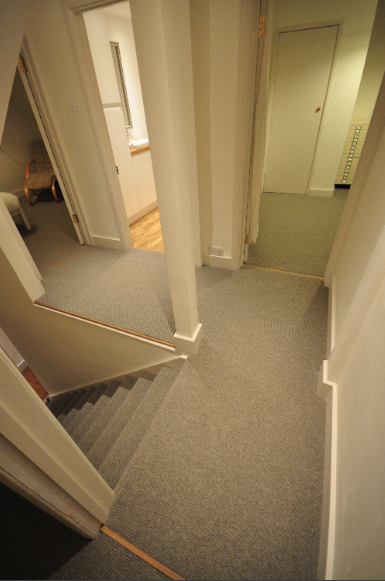 Now the fun bit can start - actually moving in! We are having all sorts of fun, unpacking things we last saw in May and June 2013. Paul is booked in to return at the end of the month to carpet the sitting room - between now and then, we have to completely empty THAT room - and decorate it!
Posted by Unknown at 12:25 2 comments: