Here is a reminder as to how wonderful my wife is - six months pregnant, and up a scaffolding tower painting the workshop. 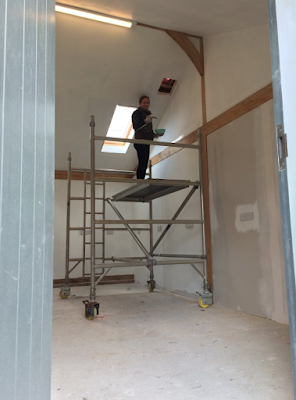 The painting is finally finished - which means it is time for the floor to go down! Nothing spectacular; this is a workshop after all - but we might as well make it look nice, right?

We chose a cheap laminate floor from B&Q - it has a surprisingly good finish and it textured, to allow a non-slip surface. The gold stuff is foil backed foam underlay. 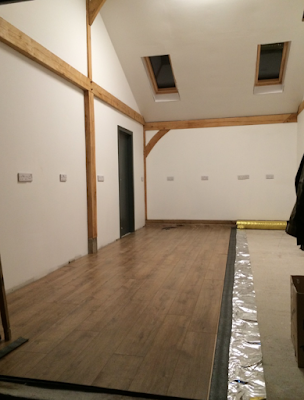 I made a couple of thresholds from offcuts of oak work surface, which are thouroughly siliconed in and oiled to prevent any water ingress affecting the laminate, and to improve the air tightness of the room. 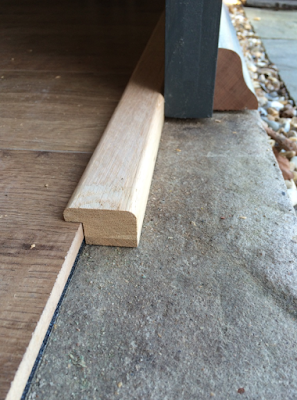 This was the first 'job' in the newly floored workshop - making MDF covers for the brickwork that the structure of the Barn sits on. The Laminate needs an expansion gap all round, so there was no easy way to edge the floor without covering the bricks. It looks much better for painted covers over the brick and simple skirting throughout. 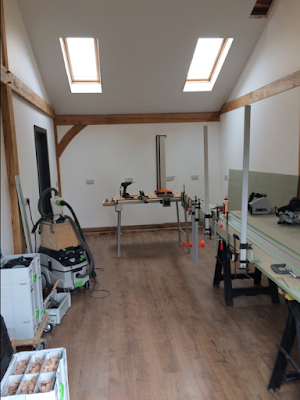 We bought a new woodburner for the Workshop - nothing fancy, just a chinese steel stove from a local firm. It is much more in keeping than the vintage Jotul I bought initially. I'll need to install a hearth (just a 12mm tile, thanks to the design of the stove) and tile a section of the wall behind the stove to comply with Regs. I wanted a stove with a little pasty warming shelf, but Kristy was concerned that I wouldn't even need to leave the workshop for lunch, so that idea was scrapped! 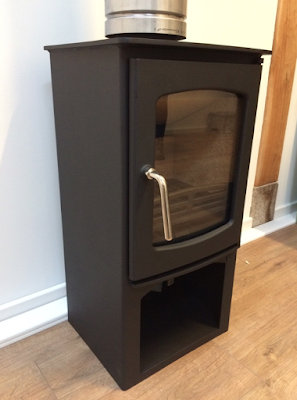 Lastly, this morning I took delivery of a pair of roller cabinets for storage of general tools - the pretty ones will live out above benches, and the normal ones will live in these drawers. Despite the foul colour, these cabinets are very well regarded and were great value for money. I intend to build them into an MDF frame with a hefty work surface on the top, and a hidden bicycle work stand in one end - this will be my 'dirty bench' for fettling anything mechanical - bikes, chainsaws and the like. 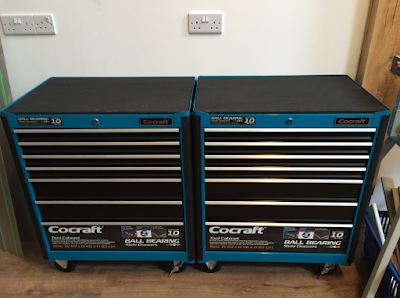 Hopefully the stove flue will be delivered tomorrow - here's looking forward to a toasty warm weekend in the workshop!
Posted by Unknown at 17:34 7 comments:

Apologies for the absence; life is getting in the way, particularly with a baby ten weeks away!

Shall we catch up with the kitchen?

Even before the joinery was finished, we ordered the flooring. This was a bit of an indulgence - we bought Karndean flooring, which is a wonderful vinyl laminate product that is warm, very hard wearing and quiet under foot (and paw). It is expensive - over £50 per metre in store - but we managed to pay about 40% less online. This stuff is called LooseLay, which means that it has a non-slip backing and stays in place through friction alone. I was skeptical on first contact, but it works very well.

Here is a demo pack, played over the old laminate tile effect stuff; 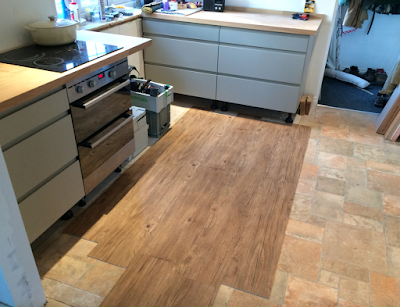 This is the view looking the other way - you can see the open shelves I made from some off cuts of worktop. 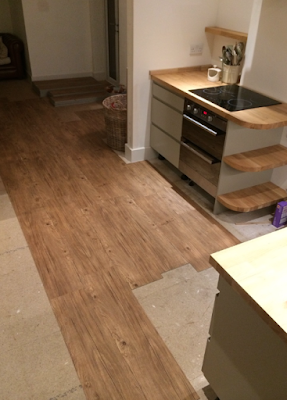 The Karndean product needs to be carefully 'contained' by skirting and thresholds - this helps prevent any movement. This was the perfect opportunity to replace our stove hearth. Our old hearth was flush with the floor, and therefore not Building Regs compliant - the rules are designed to prevent a (flammable) rug being laid underneath the stove door, thus presenting a fire risk. We bought a simple slate square, custom cut to the space. 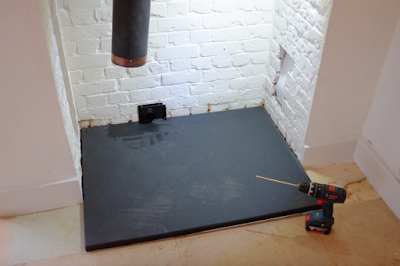 The black bit attached to the wall is the fresh air vent for the stove. We had a hole before, but this was drafty when the stove wasn't running - a simple blast gate (designed for wood dust extraction systems) was fitted, allowing fresh air to the stove when open. 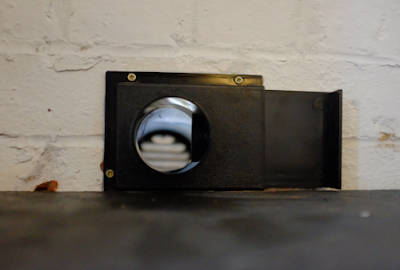 Lastly, I refinished our dining room table. This previously belonged to my parents; I have eaten meals at this table for most of my life, so it has real sentimental value. The table had a lot of water damage - mostly from wet glasses leaving rings - and it needed a good sanding and re-sealing. You can see the difference a session with the sander made - the darker part is the old finish. 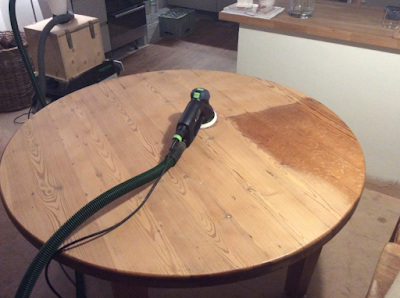 So that's it - the Kitchen is Finished! It was a real slog, and there are a few niggles left to sort out, but the difference it makes to the feel of our home is enormous. 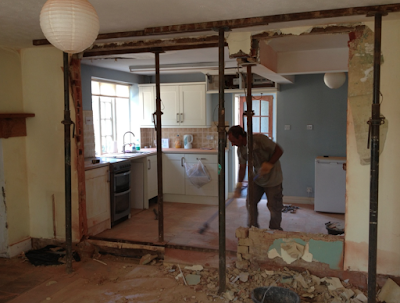 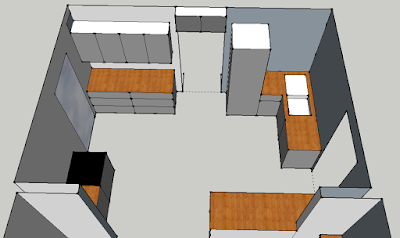 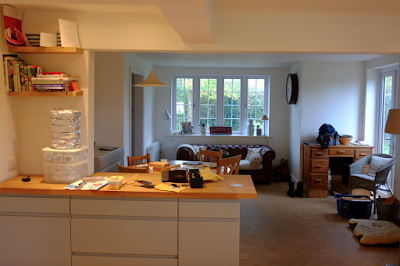 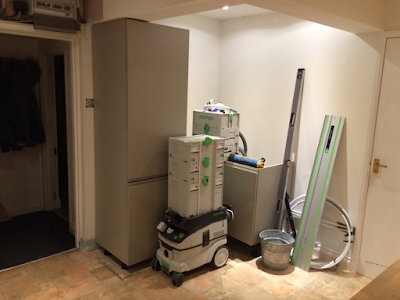 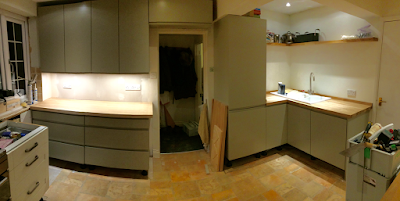 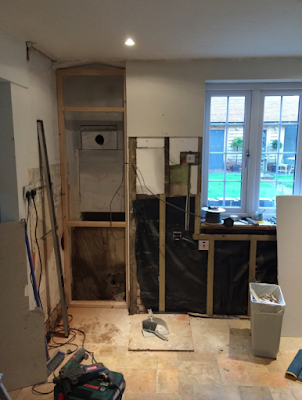 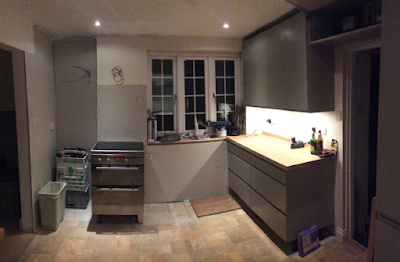 There are still a few jobs to do - fit the units around the cooker and make some floating shelves, fit all the plinths, trim around the wall cupboards, finish filling and painting etc. The new floor is going to be very exciting - we have tolerated old lino and bare chipboard for two and a half years - but finally the end is in sight! A new hearth for the woodburner and new skirting will complete the job - finally!
Posted by Unknown at 11:27 2 comments: