If we are to judge a week in terms of the number of long term aspirations finally achieved, this one was pretty spectacular. I'll rewind about five years to take up the tale...

Ever since I developed a fascination for homesteading (my catch-all Americanism for a self reliant lifestyle on a bit of land - growing stuff, building things and generally going against the grain of modern life) I've hankered after a tractor. Why? Just think of the jobs you could do with one! Mowing, lifting heavy things, pulling logs out of the woods, splitting those logs with the hydraulics, towing trailers, scraping earth in about a dozen different ways, dragging things - I could go on. I really wanted a tractor.

However, the realities of living in a small terraced house in Berkshire meant that, had I bought even the teeniest of teeny tractors, I wouldn't even have been able to get it into our postage-stamp sized garden.

Fast forward to our current (and amazing) home. Loads of space (and jobs) for a tractor. For reasons that I'm yet to quite fathom, a proper tractor seemed to slip out of my mind - perhaps the excitement of moving pushed it down my list of dreams! I bought a great little John Deere ride-on mower which has more than paid for itself - our land is mostly grass for now - but it was a bit of a one trick pony. It could mow, and tow a small trailer, but not much else. Plus, it used a lot of fuel in it's 18HP petrol engine.

So thoughts turned to a tractor again. The catalyst was having the last order of oak for the Barn - those beams are HEAVY - moving and lifting them was possible, but only just. A strained back at this stage would pretty much cancel our wedding this summer (no back equals no barn building equals no wedding venue) - so I decided to act.

After a number of months of searching (and a poor attempt by somebody to scam me out of two month's wages on eBay...) I found the perfect little tractor at a dealership in the Midlands. 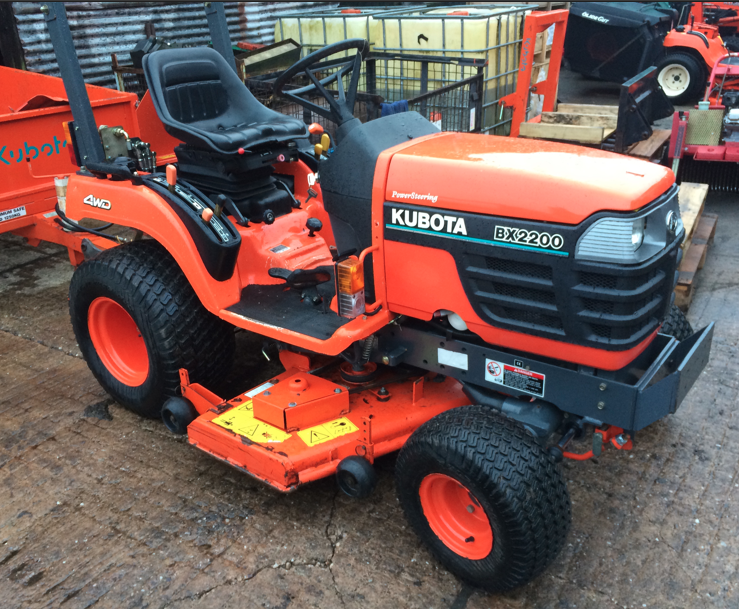 She is a Kubota BX2200 - a little 22HP three cylinder diesel, but a proper tractor nonetheless. It has hydraulic transmission, a mid-mount mower deck, three separate hydraulic circuits, a rear linkage that will lift half a ton, mid and rear PTOs and is ready to be road registered. It only has 500-ish hours on the clock - barely run in for a Kubota.

The first attachment I've bought is a set of folding pallet forks - primarily for oak beams but also to be used for logs. Here she is earning her keep - moving a big pallet of freshly split ash logs down to the house. 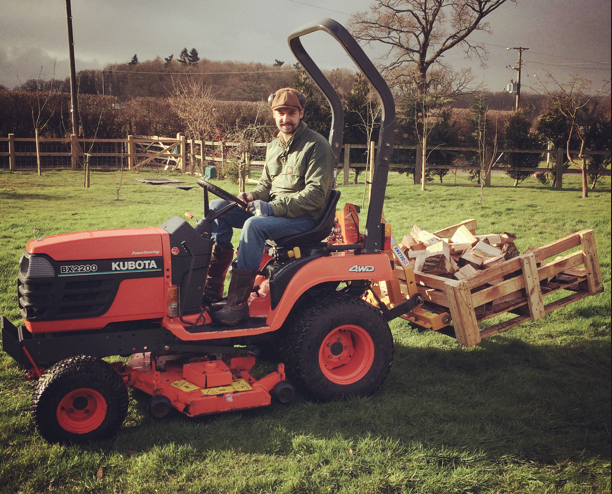 I've also used the tractor to move the oak beams about on the slab - it's great being able to pick up three beams at once and lift them straight onto the saw horses for processing.

The barn is racing along - helped by a bit of process management advise! All the working drawings are on my Macbook, so whenever I needed a dimension I had to walk from the slab to the house and check on the drawings. Why I didn't think to print some working drawings sooner I'll never know! Anyway, I've now got a load of laminated and dimensioned plans like these to refer to;

This was the bit I finished this weekend - the covered storage are accessed from the garage. With another couple of dry days forecast next weekend, I should be able to finish about half of the uprights for the building... watch this space!
Posted by Unknown at 11:36